This is a very picturesque Greek village dotted with white houses, a couple of stunning beaches that are within walking distance, and is also the home to the Acropolis of Lindos, the third most visited archaeological site of Greece!

To give you a good idea, below are some of the best sights to see and activities to try in Lindos.

Undoubtedly one of the must visit places in Rhodes island and not just in Lindos is none other than the Acropolis. Thanks to its location atop a rock, you can see Acropolis no matter where you are in the village. Upon entering the village, all you have to do is follow the path leading to it on a 10-minute ascend on foot.

Lindos village had its Golden Age between 6th and 7th century BC. During that time, the village played a key role in Greek colonization movement and also served as the major trading center.

What to See in Acropolis

Upon entering Acropolis’s archaeological site, you will see the relief of a boat that has been carved into a rock dating back to 180 BC. You can climb the large stairway leading to the Knights’ administrative buildings. You will then get reach an open space after passing through them. The Byzantine church of St. John is located on the first level built during the 13th or 14 century on the remains of the older church. You can also find here to remnants of a temple that probably date back to the Roman period. There is also the stairway to the Propylaia and a huge Hellenistic stoa. You will surely fall in love with the incredible view from Acropolis of Lindos village. You will be able to see the white houses as well as the main beach along the scenic St. Paul’s bay.

The temple of Athena Lindia that was constructed during his time on the site of a structure made earlier. The temple is found on top of the stairs together with other buildings that were further added during the Roman and Hellenistic times. When 14th century came, the Knights of St. John erected the fortress to keep the islands protected from the Ottomans.

It is best to schedule your visit as early in the day as you can since it tends to get really hot. Make sure you also bring water with you, put on some sunscreen, and wear a hat.

Take A Walk To The Cleobulus Tomb

Undoubtedly, the Acropolis of Lindos is a legendary monument, but you can find another one just few kilometers away. Continue exploring this historic area by taking a walk to the Cleobulus Tomb. Cleobulus of Lindos, was a poet and also one of the 7 Sages of Ancient Greece. He ruled the ancient greek city of Lindos in 6th century BC. You will find a statue of him atop the village, overlooking the bay.

You’ll easily find the path as there are lots of signs to guide you. The distance is approximately 3kms from the village and relatively easy to navigate. The views are going to reward your effort as you won’t find better place of the entire landscape anywhere else in Lindos. 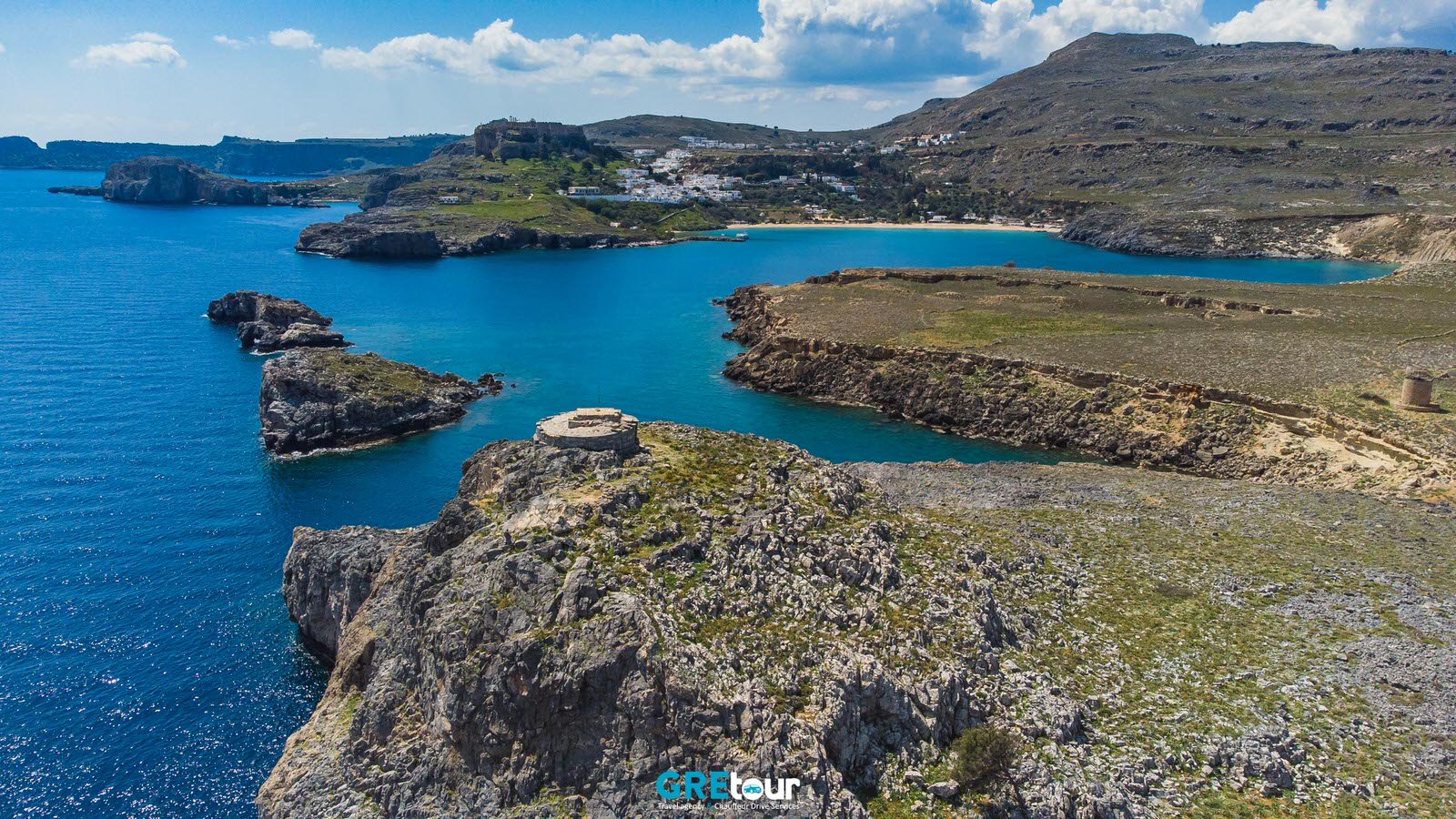 Lindos’ ancient theater is a site that is usually overlooked in favor of the main town and the Acropolis but what people don’t know is that the archaic amphitheater is actually a fascinating attraction in itself in more ways than one. The ancient theater dating back to 4th century BC featured an orchestra and a grand stage with a capacity to house up to 1,800 spectators. This was commonly used for athletic competitions and musical shows. The location of the site that is one of the must visit places in Lindos is only 10 minutes away from the central square and you can visit it for free. Thanks to its location at the easternmost part of Rhodes Island, it isn’t really surprising that Lindos is the best place to be if you are a certified chaser of sunrises. While you can expect to struggle a bit with the early waking up in the morning, you will get an amazing reward in the form of the gorgeous view of the sun emerges from the Aegean Sea. 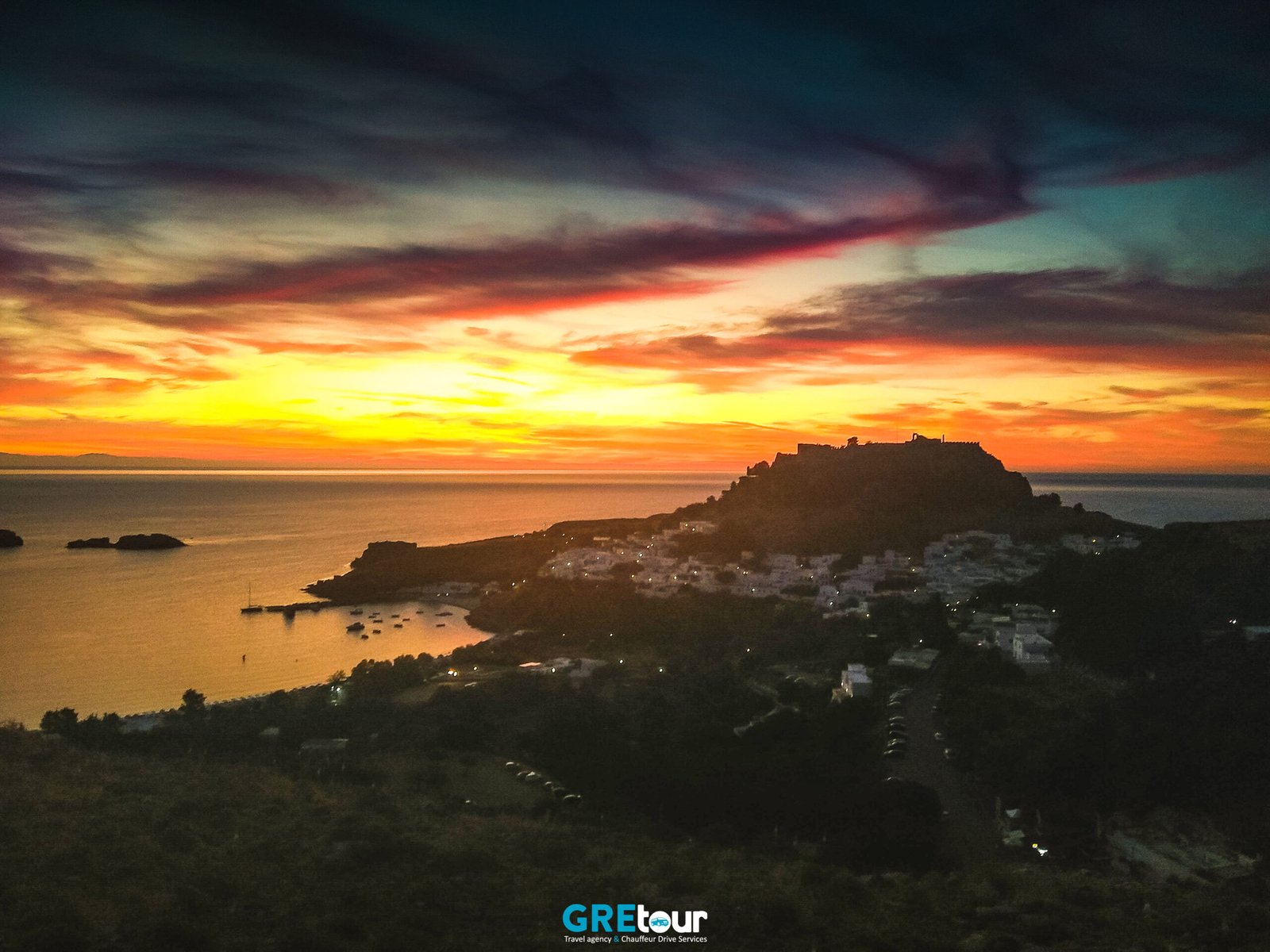 Wander Around the Alleyways of Lindos Village

For the longest time, visiting Lindos village is among the best things to do in Rhodes island and you will learn the reason why once you start wandering around its winding alleyways. The village is abundant in white-washed houses, quaint boutiques, and small restaurants and bars boasting beautiful views of the sea and lovely terraces. 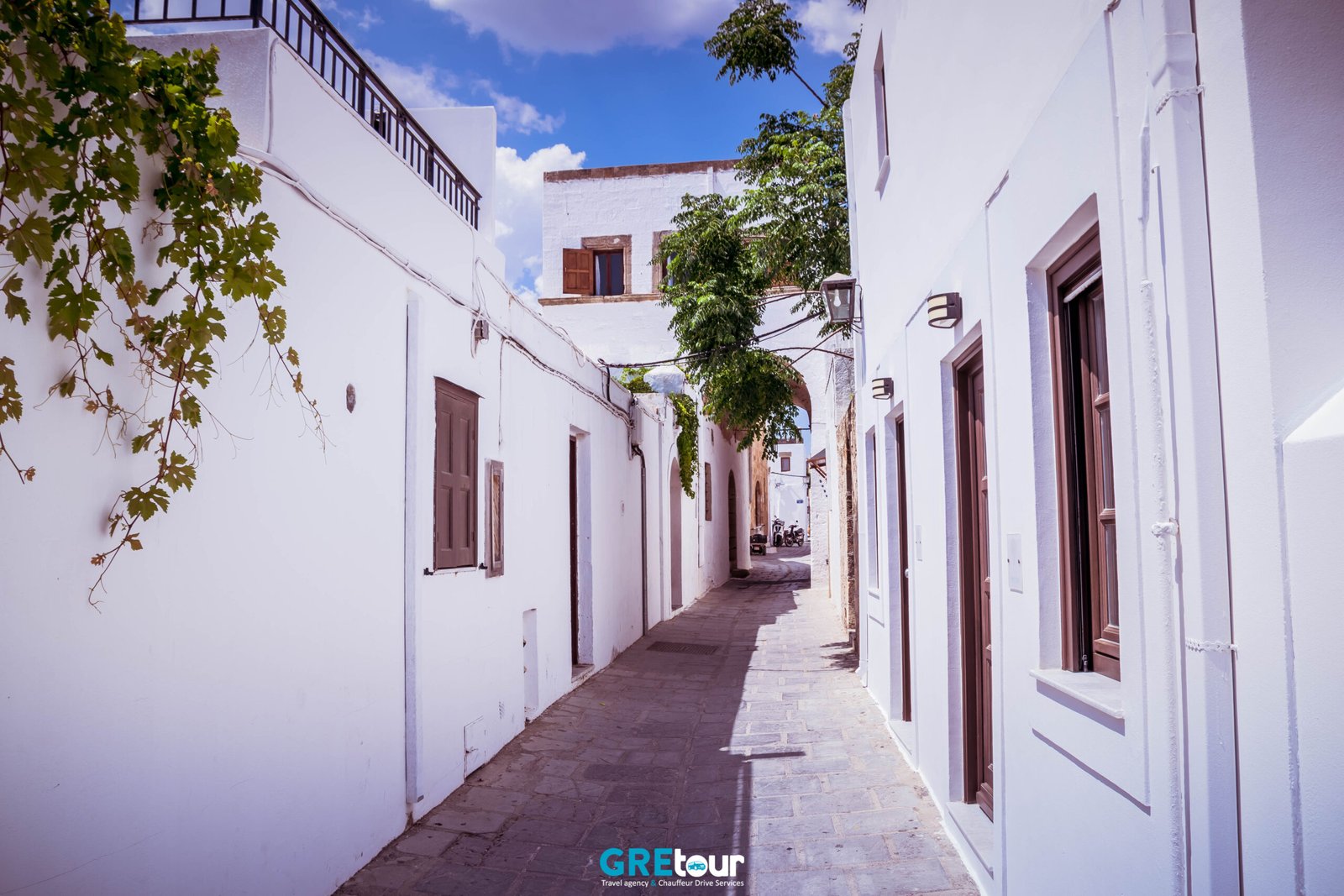 Drop By at the Church of Panagia

The intricate and small chapel of the Church of Panagia in Lindos features the usual Rhodian campanile tower and the striking pebble mosaic flooring. Its interiors are no doubt among the best things about the church with its gorgeous hanging chandeliers, wooden iconostasis, and colorful frescoes. 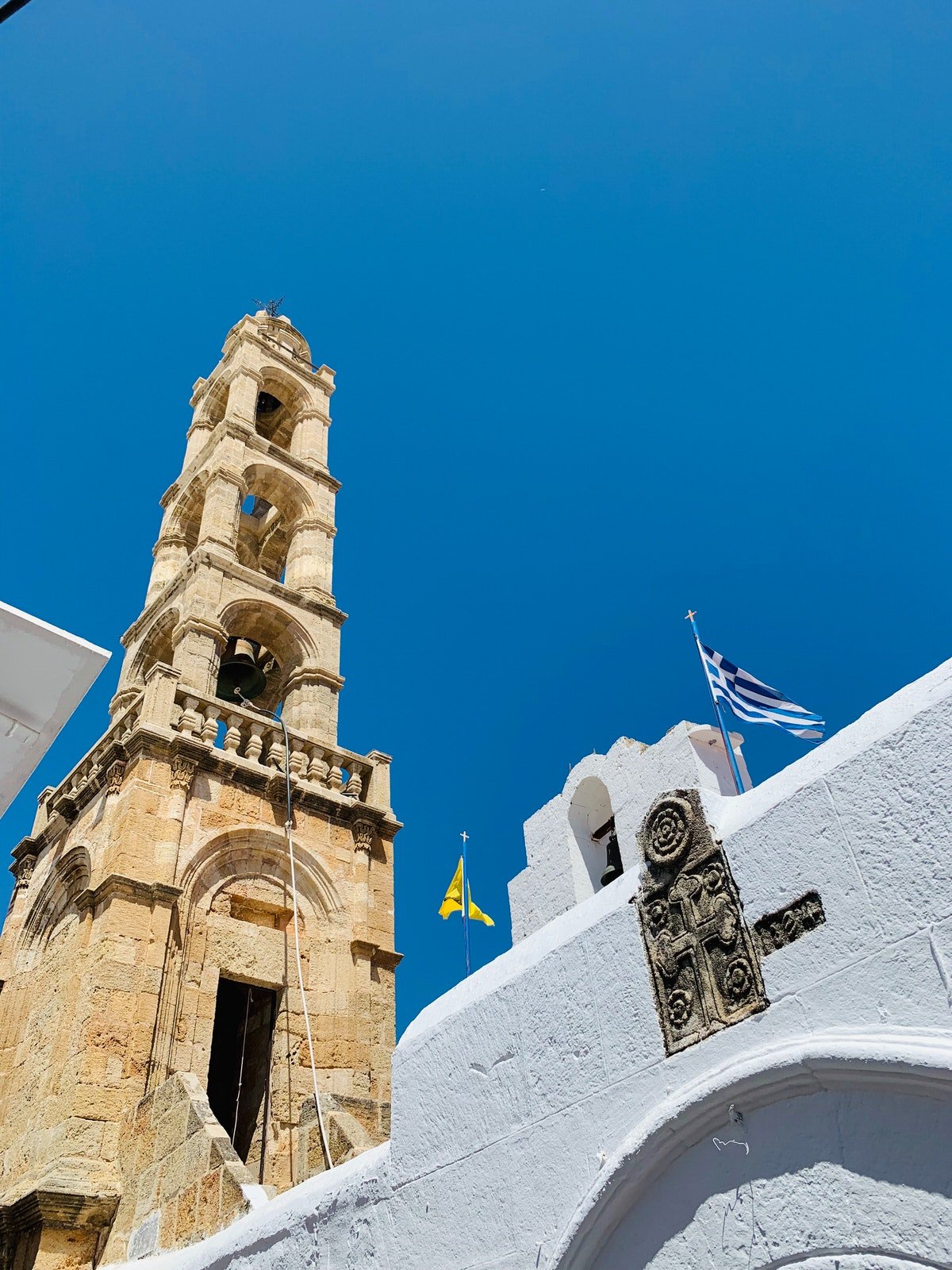 Take a Dip at Lindos Beach

Lindos beach is a great alternative if you are looking for a great place to swim. The beach is the main stretch of sand close to the town and is bigger than St. Paul’s bay, which means that it offers more choices when it comes to tavernas and sunbeds. Although there is a pretty strenuous and steep walk down to Lindos beach, you can ride the shuttle service offered during the peak of the summer months. Go for a Swim at St. Paul’s Bay

Paralia Agios Pavlos or St. Paul’s Bay is the charming bay right down from the main village and you can see it from the Acropolis. The bay is the best spot for going for a refreshing swim after a long day of exploring the archeological site with a café, parasols, and sunbeds available.

The water is shallow and clear with the edges surrounded with rocks, making it a great spot for families. As you stroll along the streets, you will see several boutiques and souvenir shoppers selling items ranging from designer clothing and handmade crafts to local produce including oil, olives, spices, and herbs. This is a lovely way spend time on the shaded streets to enjoy a quick break from the hot midday sun. Remember to give yourself some time for market research before you buy your souvenirs as prices vary from shop to shop. You can find a very good deal for the same product you bought 50 meters furtherer! Grab a Drink at a Rooftop Bar

Once the sun stats setting, don’t miss the chance to visit a rooftop bar that overlooks the stunning Acropolis. One bar worthy to visit is the stylish cocktail bar Lindian House Bar. This bar serving up premium spirits, drinks with a twist since 1991! Also often features some of the top DJs of the island who play a relaxing mix of afro and deep house music. 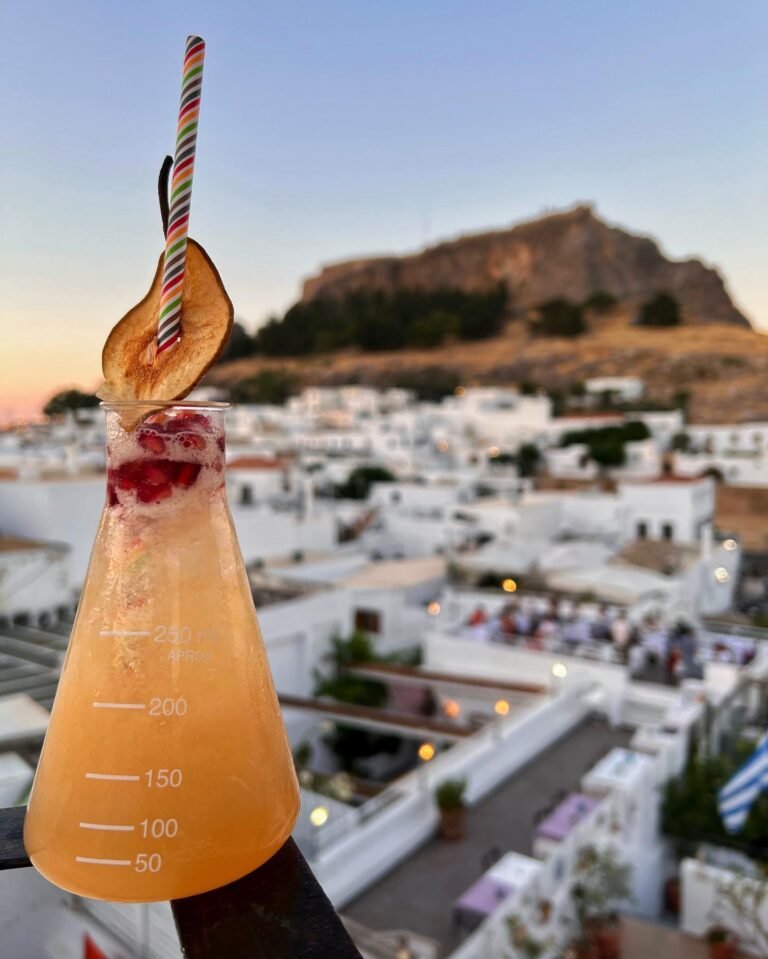 If you are looking for some of the best places to visit in Rhodes island, Lindos village has got you covered.  A visit to this beautiful place is definitely worth it wherever you stay or whatever the duration of your holidays is.

Did you like our ”10 things to do in Lindos village” checklist? Do you think any activity or place is missing of it? Then leave your comment in the section below and we will possibly add it shortly. Also, share the article on your social media and subscribe to our newsletter to get our latest posts!