As we mentioned in our previous related article Legends and Myths of Rhodes island, mythology interpreting significant geological or meteorological phenomena. Another important story of mythology of Rhodes Island has survived through the ages concerning the Kritinia region. Kritinia is on the west side of Atavyros, the highest mountain of Rhodes.

One of the sons of the Cretan King Minos, Catreus, had three daughters and a son. Aerope, Clymene, Apemosyne and Althaemenes. Once Catreus consulted the oracle about his future, and found out that he would be killed by either his children or his grandchildren. Wishing to avoid his fate, Althaemenes and Apemosyne got into a ship and sailed away. They ended up in Rhodes, south of Kamiros, at a place that Althaemenes named “Kritinia” so as to be reminded of Crete, his place of birth. 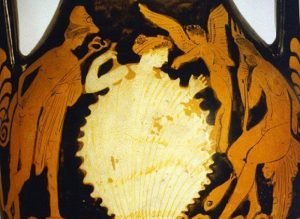 Meanwhile Apemosyne grew up and became a beautiful girl. She was so pretty that god Hermes fell in love with her. According to the myth, god Hermes became so overwhelmed by her beauty that he rushed to mingle with her but the girl managed to escape. Then, Hermes set up a trap in the path that Apemosyne followed every time she went to a spring to get water from. So Hermes managed to capture her by skinning animals and leaving their slippery hides in her path. The god raped her and the girl became pregnant.

When Althaemenes saw her, he became angry and asked his unmarried sister to explain to him how and by whom she got pregnant. When she told him what had happened, Althaemenes didn’t believe her. Thinking that she was lying to him, he got so mad at her that he kicked her with such force that the girl died.

Meanwhile in Crete, Catreus always fearing the oracle, gave his two daughters Aerope and Clymene to Nauplius and ordered him to either abandoned them in a foreign land or throw them overboard because the two girls had mingled with men of his guard. Nauplius ignored the murderous commands of Catreus. He fell in love with Clymene, married her and had a son with her, the famous hero Palamidis. He also gave Aerope to his friend and fellow traveler Pleisthenes, son of Atreus. Aerope gave birth to two famous sons, Agamemnon and Menelaus. 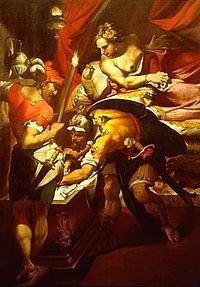 Fulfillment Of The Prophecy

Years later, Catreus sailed the seas searching for a good young man to inherit his throne. In the middle of the night, his ship stopped at Rhodes and was mistaken for a pirate ship. Althaemenes and others attacked the “invaders”, thinking they were pirates and the prophecy came to pass; Catreus died at the hands of his son, from ajavelin blow. When the boy discovered the truth, he prayed that the earth would open up and swallow him, which duly happened.

The myth of Althaemenes, who was honored by the ancient Rhodians as a local hero, certainly looks like a variant of the myth of Oedipus. His name is associated with Althea, which means “healer” and perhaps is another name of the moon, meaning the “nurse”, the one who contributes to growth and has therapeutic abilities.

Another mythical variant presents Althaemenes as the son of Cissus (Ivy) worshiper of Dionysus. In each case the ending of the myth with the disappearance of Althaemenes in the precipice, suggest that the cult of the hero reflects a chthonic god worship with a Cretan origin, judging by the place named Kritinia.

The etymology of the name “Apemosyne” also gives us some useful information. It means “the one who escapes from suffering, the harmless one”. Both the transfer of water from a spring and the girl who slipped into the freshly skinned and hides reveal a series of magical rituals to evoke rain. The rape of Apemosyne by Hermes may reflect or indicate the predatory exploitation of water in times of drought, from which Rhodes has suffered a lot. It may also imply massive torrential rainfall that causes deadly flooding.