The Acropolis of Rhodes dominated the western and upper parts of the city. Not guarded like other ancient acropolises, it consisted of a vast city with sanctuaries, big temples, public buildings, and hidden places of worship. Buildings were built on steep terraces supported by strong retaining walls. It was, in terms of the 2nd c. AD speaker Ailios Aristides, “full of fields and groves.”

During the Italian invasion, there was substantial rebuilding in line with the mood of the period. In 1946 onwards, the Greek Archeological Service carried out reconstruction research in the region of the Temple of Pythian Apollo, which had sustained substantial damage as a consequence of the bombing of the Second World War and the weight of the cannons mounted there.

In the ’60s and ’70s, restoration practice was carried out on the western base of the same temple, and in 1996 further renovation of the building and the Nymphaia was carried out.

The whole Acropolis is still not fully excavated. An archeological region of 12,500 m2 has been isolated from contemporary buildings to resume the exploration of the ancient city of Rhodes. This UNESCO-listed medieval town is filled with mysteries of past and a great place to explore. A tour in Rhodes town can include the most famous monuments in the archaeological zone:

These temples are on the northern side of the Acropolis, and they are one of the most interesting places to visit in Rhodes town. It is directed E-W with a columned portico on all four sides. Four oversized column drums and parts of the capital and the architrave still visible on the site are evidence of its exceptional character. It was here that the Rhodians held the records of their treaties with other nations. The temple stood in a large sacred enclosure surrounded on the east by a Stoa.

To the east and the south of the Stoa wall, Nymphia comprises of four underground cave-like constructions carved into a rock with entry stairs, connecting passageways, and a wide hole in the middle portion of the building. There are spaces for figurines in the inner walls. The image is completed by water cisterns and lush vegetation. It is a site of leisure and worship.

Northwest of the stadium is Odeion, a tiny marble built. It was attended by almost 800 spectators and is supposed to have been used either for musical activities or lectures in rhetoric offered by prominent Rhodian speakers. 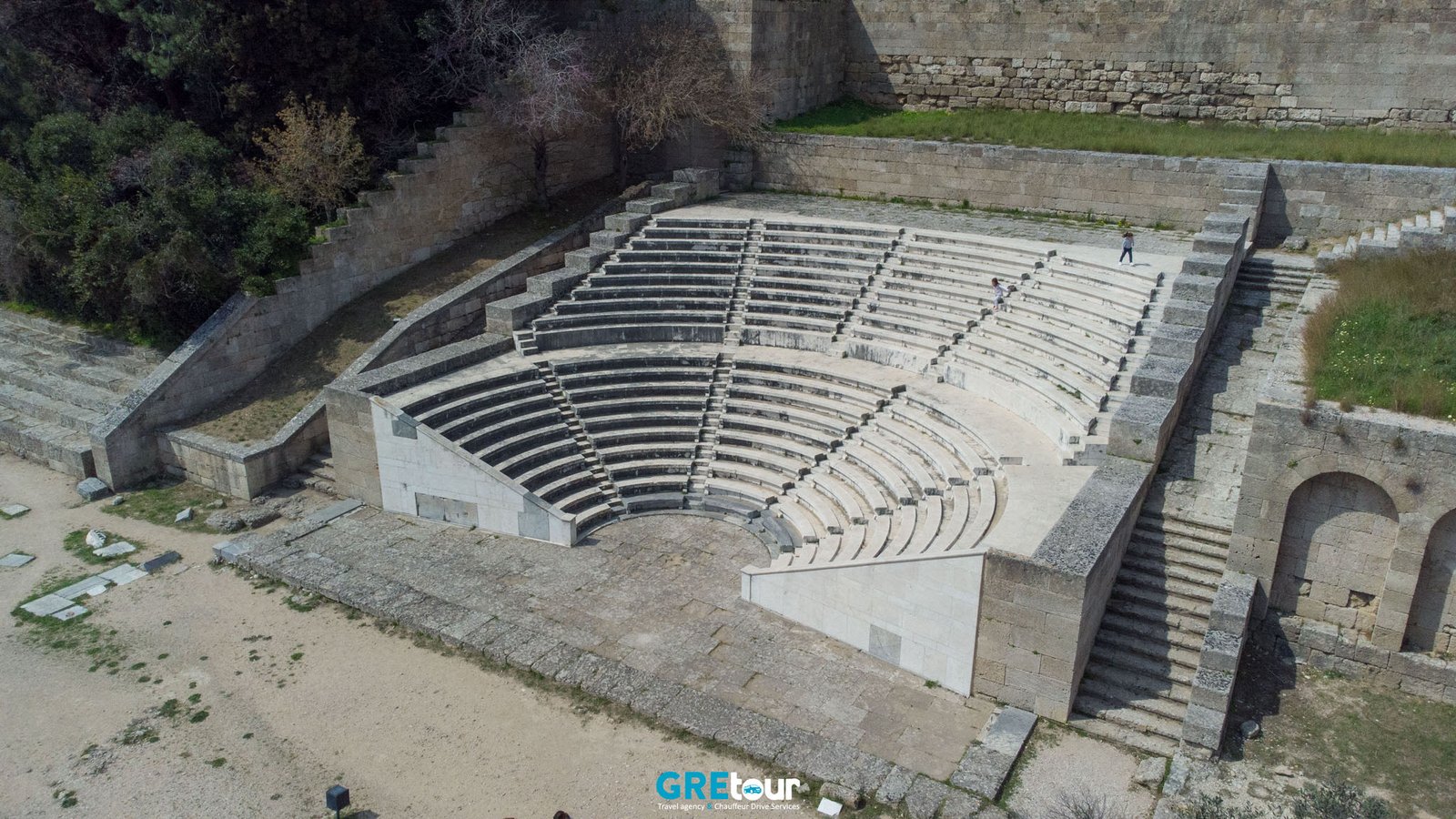 Standing on the south side of the hill and the west side of a wide rectangular terrace. Τhe temple is positioned E-W. It was a peripteral temple of Poros, but smaller than the temple of Athena and Zeus. A portion of the NE side was revived with four columns and part of the architrave.

The foundation wall of the Stoa has been preserved. It must have had an impressive exterior visible from the lower town and the harbor. The building of Stoas were used as framing devices. Also, designed to create safe and protective areas which provided useful outside space.

There is also a site of worship on the NE side of the terrace where there are remains of the cult of Artemis. Artemis was the daughter of Zeus and Leto and goddess of the hunt and wild animals.

With an N-S orientation, visiting the stadium on the SE side of the hill is one of the main things to do in Rhodes. Evacuated and restored by the Italians, it is 600 feet or 210 meters incapacity. The real initial remaining pieces are the sphendon, a rounded end with a turning post, proedrye seat of officials, and some of the lower seats in the auditorium. The initiation process for the athletes is also maintained. 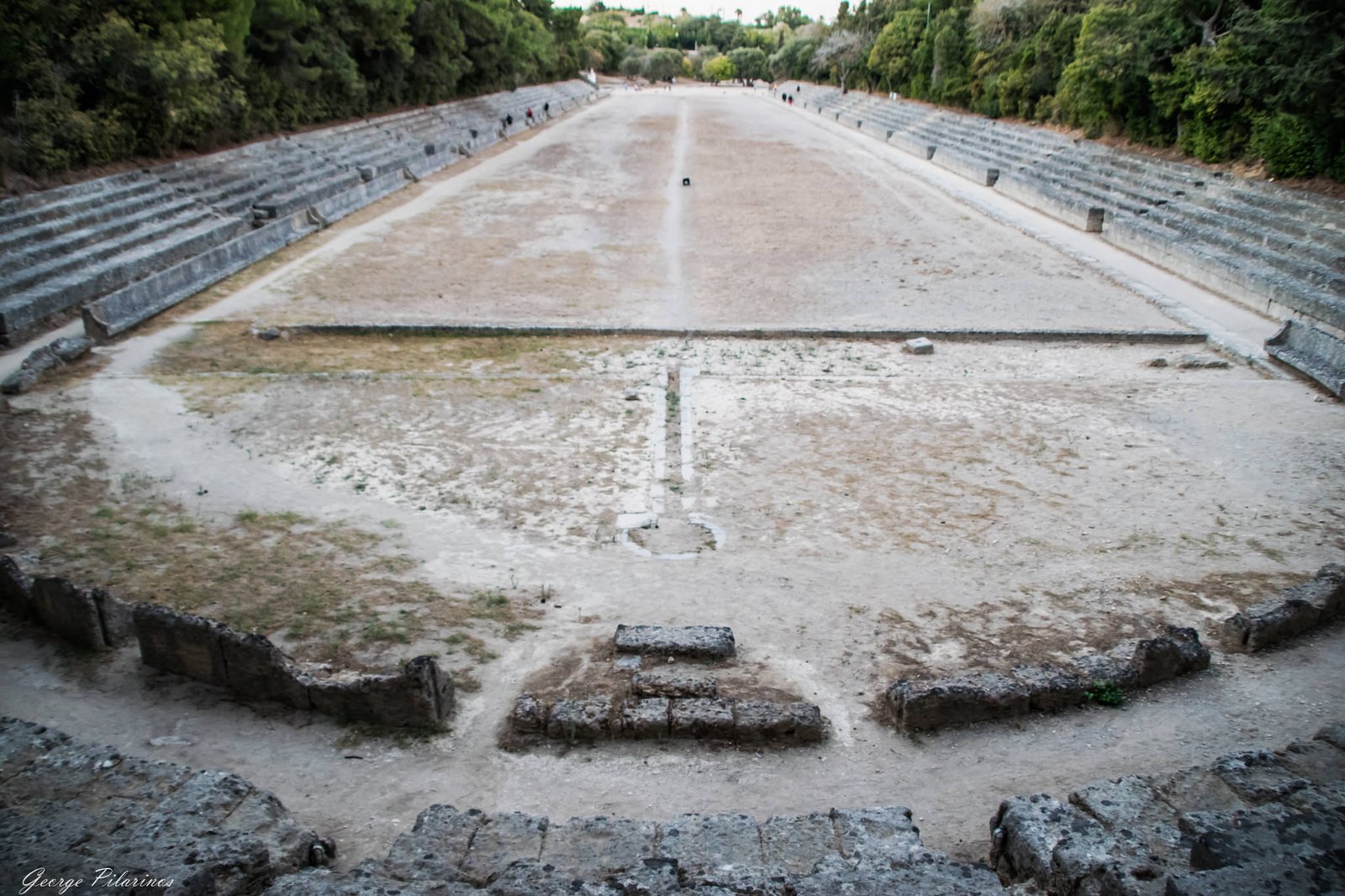 According to an inscription found in the city, there was an excellent library containing outstanding works of rhetoric which used to be present near the Gymnasium and the Odeion.

Just east of the Stadium, it was a large square building, some 200 meters on each side; important for the works of art that it contained. Part of the western side was uncovered in the past, and recently the NE corner was discovered under the modern refreshment pavilion. 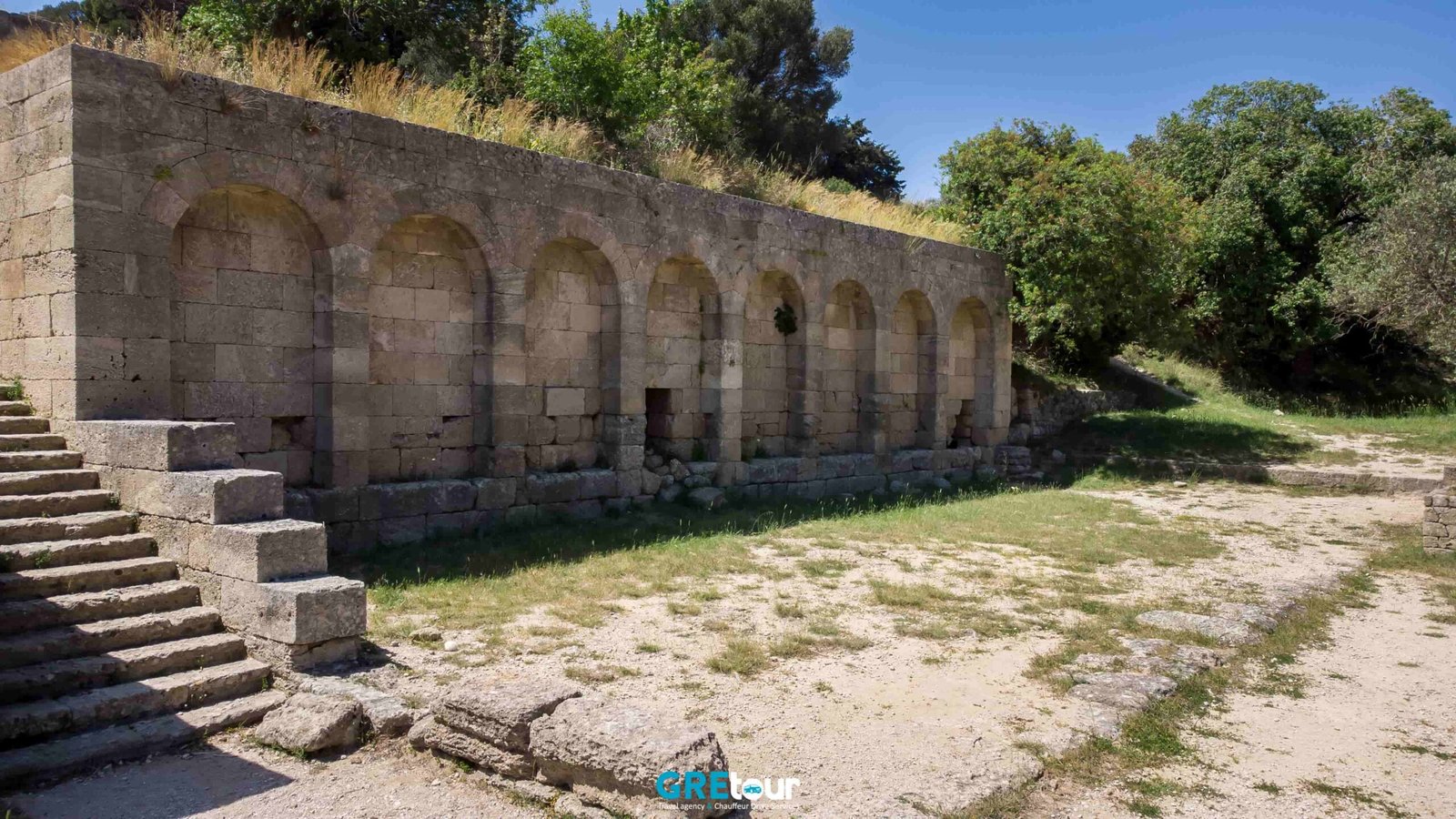 Do you want more travel guides of Rhodes island? Then subscribe to our blog and be the first to get our latest ones!